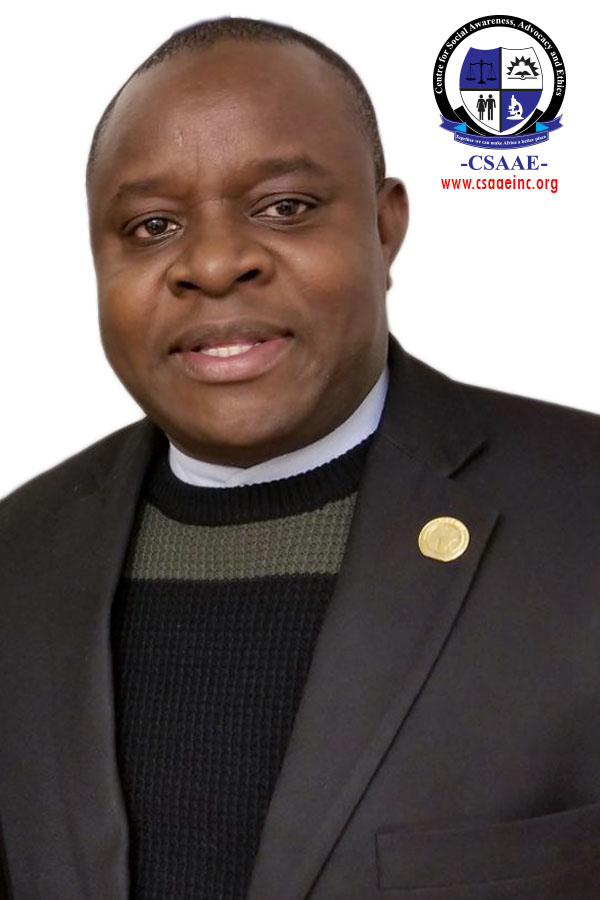 Godswill Uchenna Agbagwa is a Catholic priest, an academic, a socialpreneur, a youth animator and founder of CSAAE. He was born in Umueze, a small village in Ikeduru LGA of Imo State, Nigeria. As a child, he had a comfortable life, thanks to his hardworking parents, Mr. Charles and Mrs. Evelyn Agbagwa. Things took a bad turn in 1990 when his father, a high school proprietor, passed away leaving his mother, a petty trader, to fend for their seven children.

Poverty quickly set in and for many years little Godswill and his siblings managed to feed, obtain medical care and pay tuition. It was then that he started dreaming of a better Nigeria where all can find support and encouragement to work hard, live with dignity and feel proud to belong. His dream was deceptively kept alive by a corrupt military junta that kept assuring Nigerians of an imminent coming of a better Nigeria where there would be free education, sufficient food, reliable electric power supply and clean drinking water. Every night, Godswill dreamt of this kind of Nigeria. Morning came followed by night, but they remained poor, hungry and helpless. He still had to trek several miles to fetch drinking water, burn nightly candles to study for exams and prayed that he did not fall sick because there was no good health care facility.

By the time he was ordained a priest for the Catholic Archdiocese of Owerri, Nigeria, in December 2003, his dreams of a better Nigeria had faded away. But in 2008, while on study leave in the United States, the dream came back. As he toured Europe and North America during vacations, he wondered why basic amenities such as clean drinking water, uninterrupted electricity supply, paved roads, and good healthcare are considered luxuries in his native land. He wondered why he was treated with contempt at the airports and wept at Toronto international airport in 2008 when an immigration officer inquired how much he gave in bribes for his Nigerian passport. It was then that his dream of a better Nigeria turned into passion.

For several years, he struggled, day and night, to unravel the root causes of poverty and underdevelopment in Africa. He read books and articles on poverty and underdevelopment in Africa. He attended conferences and seminars and engaged anybody that cared to listen. He then took a trip back home to re-assess the situation of things. Nigeria was still a sorry state. After prayerful reflections, he became convinced that poverty and underdevelopment in Nigeria are caused by a combination of failure of leadership, loss of social and moral sense, as well as loss of entrepreneurial spirit. He then came to the conclusion that Nigeria can indeed become a better place for all if we can start nurturing a new generation of leaders and work-force imbued with the morals, entrepreneurial spirit and excellent leadership skills to facilitate development and end poverty and so decided to establish CSAAE for the purpose of working towards this dream. CSAAE focuses on young people because Fr. Godswill strongly believes that with youths comprising 62 percent of Africa’s population, much of Africa’s future lies in its young people who have the potentials to shape a more positive future for themselves and others.

Although CSAAE was registered as a non-profit organization in Nigeria in 2010 and as a 501(c) entity in the United States in August 2013, he did not commence activities at the Centre until December 2013, just one year after his mother’s death. It is interesting to note that the first person that Fr. Godswill shared his dream with was his mother. She was very supportive and strongly encouraged him to establish the Centre but did not live to see it as she died in 2012. After her death, Fr. Godswill became depressed and decided not to pursue the dream any longer, but his mother told him in a dream not to give up on his dream. He woke up immediately, picked up the phone and started work on the Centre.

Fr. Godswill is highly educated. His primary education was at Community Primary School Umueze, where he graduated on top of his class with distinction. His secondary education was at St. Peter Claver Seminary Okpala, where he also graduated with the best result. For his undergraduate studies, he attended Seat of Wisdom Seminary Owerri (an affiliate of Pontifical Urban University Rome) and graduated on top of his class with triple Summa Cum Laude in Philosophy, Theology and Religion respectively. He holds MA in Legal and Ethical Studies from the University of Baltimore, STL (Licentiate in Theology) from Sacred Heart Seminary Detriot (an aggregate of St. Thomas Aquinas University Rome) and Doctorate in Moral Theology & Ethics from the Catholic University of America Washington D.C, He has advanced certificates in Workplace Mediation and Clinical Pastoral Care.

Fr. Godswill is passionate about human development. His first assignment as a priest was to serve as a parochial vicar at St. Mulumba’s Catholic Parish Owerri where, as urban youth chaplain, he helped youths develop their talents and challenged them to tackle community problems. His youth group produced music albums and movies. He also served as Dean of Students Affairs at St. Peter Claver Seminary Okpala before migrating to the United States where, as a U.S. citizen, he served as Chaplain at Catholic Charities of Baltimore and currently serves as University professor and University Chaplain. Dr. Godswill also represents African Civil Societies at the World Bank and IMF Civil Society Policy Forum Working Group. He is a frequent TV and conference guest speaker as well as writer on issues of African development. He gives about 60% of his income to CSAAE.