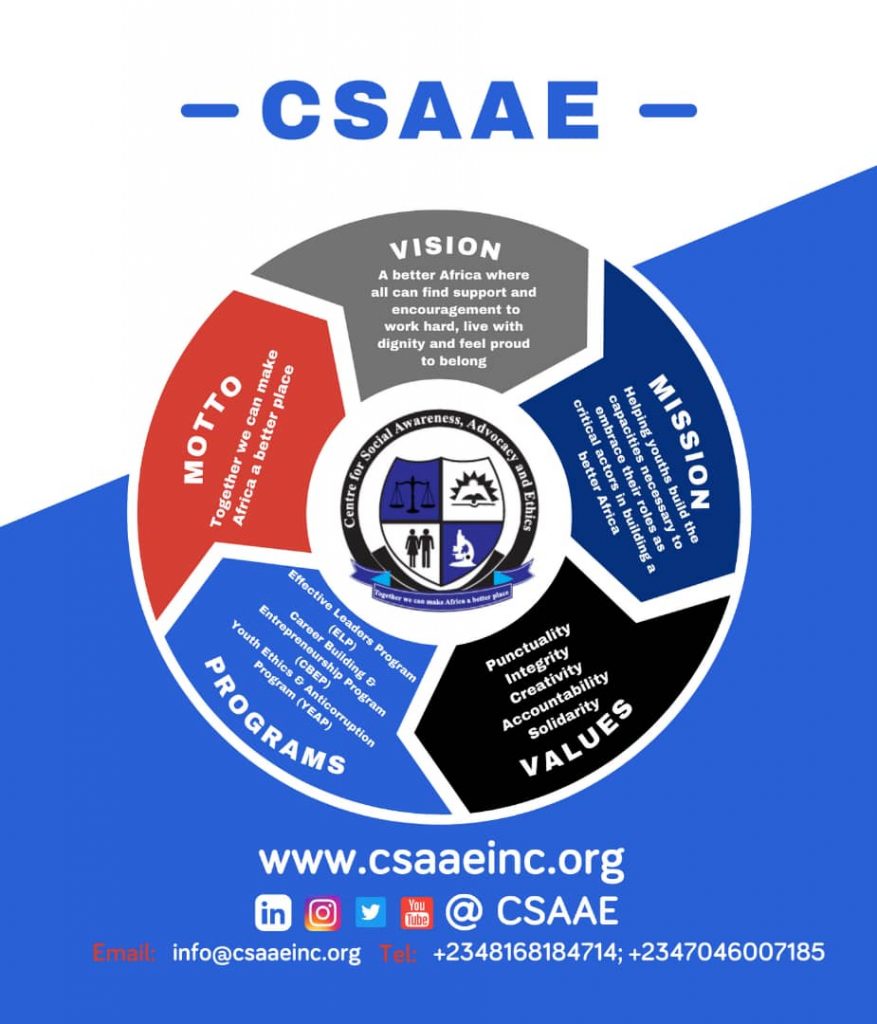 The Centre for Social Awareness, Advocacy and Ethics -CSAAE-

CSAAE envisions a better Africa where all can find support and encouragement to work hard, live with dignity and feel proud to belong. The Centre pursues this vision through three programs. 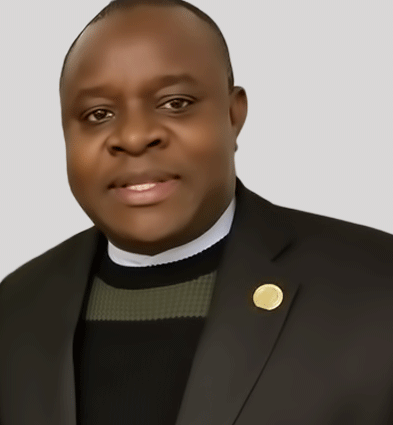 The Founder, Dr. Godswill Agbagwa – priest and social ethicist – grew up in Nigeria. His experience with poverty as a teenager led him to dedicate his priestly ministry to social and human development. In 2010, while studying abroad as a graduate student, he decided to establish CSAAE as a platform to advance social and human development in Africa. The five core values at the foundation of his work at CSAAE include: Punctuality, Integrity, Creativity, Accountability and Solidarity (PICAS).

CSAAE is a registered nonprofit in Nigeria; a 501(c3) nonprofit in the United States; an organization in special consultative status with the United Nations’ ECOSOC and former representative of African nonprofits at the World Bank & IMF. The Centre carries out its operations from its head office in Nigeria, with technical support from its U.S. office.

A better Africa where all can find support and encouragement to work hard, live with dignity and feel proud to belong

Together we can make Africa a better place

CSAAE was founded by Dr. Godswill Uchenna Agbagwa, a Catholic priest and social ethicist. He was born in Umueze, a small village in Ikeduru Local Government Area of Imo State, Nigeria. As a child, he had a comfortable life, thanks to his hardworking parents, Mr. Charles and Mrs. Evelyn Agbagwa. Things took a bad turn in 1990 when his father, an educationist, businessman and community leader, passed away leaving his mother, a trader and women leader, to fend for their seven children.

Poverty quickly set in and for many years little Uchenna and his siblings managed to feed, obtain medical care and pay tuition. It was then that he started dreaming of a better Nigeria where all can find support and encouragement to work hard, live with dignity and feel proud to belong. His dream was deceptively kept alive by a corrupt military junta that kept assuring Nigerians of an imminent coming of a better Nigeria where there would be free education, sufficient food, reliable electric power supply and clean drinking water. Every night, Uchenna dreamt of this kind of Nigeria. Morning came followed by night, but they remained poor, hungry and helpless. He still had to trek several miles to fetch drinking water, burn nightly candles to study for exams and prayed that he did not fall sick because there was no good health care facility.

By the time he was ordained a priest for the Catholic Archdiocese of Owerri, Nigeria, in December 2003, his dreams of a better Nigeria had faded away. But his experience with poverty as a teenager led him to dedicate his priestly ministry to social and human development. Although as a parochial vicar, he did a lot social and human development work in the various places he served, it was not until 2008, while on study leave in the United States that his interest in social and human development turned into a desire. As he toured Europe and North America during vacations, he wondered why basic amenities such as clean drinking water, uninterrupted electricity supply, paved roads, and good healthcare are considered luxuries in his native land. He wondered why he was treated with contempt at the airports and wept at Toronto international airport in 2008 when an immigration officer inquired how much he gave in bribes for his Nigerian passport. It was then that his dream of a better Nigeria turned into passion.

As a graduate student of social ethics and Catholic social teaching, he struggled day and night, to unravel the root causes of poverty and underdevelopment in Africa. He read books and articles on poverty and underdevelopment in Africa. He attended conferences and seminars and engaged anybody that cared to listen. He then took a trip back home to re-assess the situation of things. Nigeria was still a sorry state. After prayerful reflections, he became convinced that poverty and underdevelopment in Nigeria are caused by a combination of failure of leadership, loss of social and moral sense, as well as loss of entrepreneurial spirit. He then came to the conclusion that Nigeria can indeed become a better place for all if we can start helping young people build great careers, cultivate a spirit of entrepreneurship, become leaders of character and embrace their roles as critical actors in building a better Africa. Thus, he decided to establish CSAAE for the purpose of working towards this dream.  CSAAE focuses on young people because Reverend Agbagwa strongly believes that with youths comprising 62 percent of Africa’s population, much of Africa’s future lies in its young people who have the potentials to shape a more positive future for themselves and others.

Although CSAAE was registered as a non-profit organization in Nigeria in 2010 and as a 501(c3) entity in the United States in August 2013, he did not commence activities at the Centre until December 2013, just one year after his mother’s death. It is interesting to note that the first person that Fr. Godswill shared his dream with was his mother. She was very supportive and strongly encouraged him to establish the Centre but did not live to see it as she died in 2012. After her death, Reverend Agbagwa became depressed and decided not to pursue the dream any longer, but his mother told him in a dream not to give up on his dream. He woke up immediately, picked up the phone and called his best friend, Fr. Vincent Arisukwu who helped him back home in Nigeria to prepare for the initial Emerging Leaders Foundation Conference in 2013.

The Centre started out with the Emerging Leaders Program (ELP) which later became the Effective Leaders Program (ELP). Initially, ELP was designed to nurture future leaders. Today, ELP is not only nurturing future leaders it is promoting effective leadership, training and supporting effective leaders. ELP focuses on leaders critical to development including political, media, business, judicial, educational and religious leaders.

As the initial emerging leaders graduated from the university and gained experiences from the various trainings offered at the Centre, the Centre launched two more programs – The Career Building and Enterpreneurship Program (CBEP) and the Students Ethics and Anticorruption Network (SEACON) – led by these young leaders. While CBEP focuses on helping young people get the education they need, launched enterprises and secured jobs, SEACON focuses on training and empowering young people to fight corruption, abuse of law, abuse of human rights and bad governance.

With interest generated in SEACON, the Centre changed its name to Youth Ethics and Anticorruption Program (YEAP) to allow more young people be part of the program. Like SEACON, YEAP continued to raise awareness of the consciousness of youths towards the role of good governance, rule of law, anticorruption and human rights towards development. To ensure that the program name is actually reflecting the amazing work that the Centre is doing and intends to do in this program, the Centre decided to just use a name that would not leave people speculating about the focus of the program area. Thus, YEAP was changed to GRAHP which means: Good Governance, Rule of Law, Anticorruption, and Human Rights Program. The focus is still the same though the reach has been expanded to work with not just youths but the rest of the citizens.